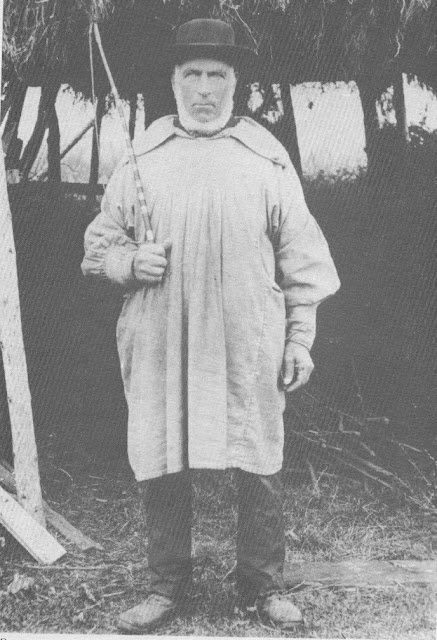 Grandfather spent all of his adult life working as a shepherd in Lambwick Hall. I remember as a child he bought me a Noah’s but replaced all the animals with model sheep. “There ain’t no need for no other animal in the World,” he said, “God knew what he was about when He made His sheep.”
He prided himself on knowing all his sheep by name, though most of them were simply called ‘baa’. He was loved by his sheep who would follow him through the village and to the pub for his lunchtime pint. At dusk he would read them a bed-time story or extracts from the Book of Common Prayer and on sunny days he would play hunt the thimble with them, but they were not very good at this.
In his later years he began to believe he was a sheep. It was a sad sight to see him grazing in the fields and one Spring he nearly drowned in the sheep dip. He died in 1962 from septicaemia after rubbing himself up against a rusty barbed wire fence.
Posted by Priddey Family History at 05:23 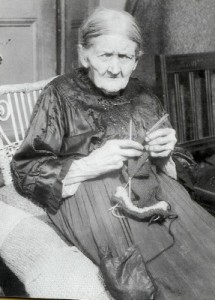 My grandmother Alice was the eldest of the three Bonnet girls. She first met my grandfather Len at the annual sheep trials once held at Boston Ferdinand and from that point their mutual interest in wool was the basis for a long and happy relationship.
In the days of World War One Alice knitted continually for the troops. It is estimated that she single-handedly equipped three regiments and a tank division with sleeveless jerkins and matching balaclavas. Unfortunately her eyesight was such that she only liked knitting in bright colours and patterns so the troops who received her garments often fell easy prey to German sniper fire.
She died in 1970 and was buried in a scarlet and mauve cable-stitch coffin of her own design.
Posted by Priddey Family History at 05:22 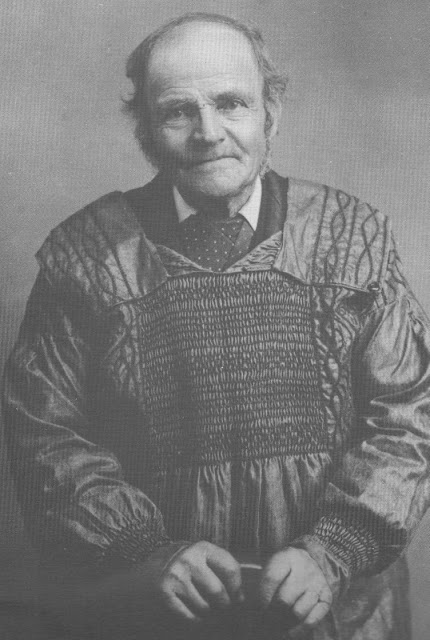 Uncle Peter never married. He was a sheep farmer who, it is rumoured, used his flock to perform dark cross-breeding experiments. It is said that he once crossed a sheep with a komodo dragon to produce a fierce woolly reptile with a herd instinct. None of these allegations were ever proven but Uncle Peter was not liked in Lambwick Hall and his farm was a forbidding place of weeds and dirty black outbuildings.
When I was a child we rarely visited, but on the occasion of his 50th birthday we went for afternoon tea. He offered me a sandwich and when I asked what meat was in it he laughed and said it was ‘shelephant’.
After his death my parents went to help clear Uncle Peter’s home. They found no animals but many drawings of strange creatures with odd heads and multiple legs. They burnt these.
Posted by Priddey Family History at 05:21 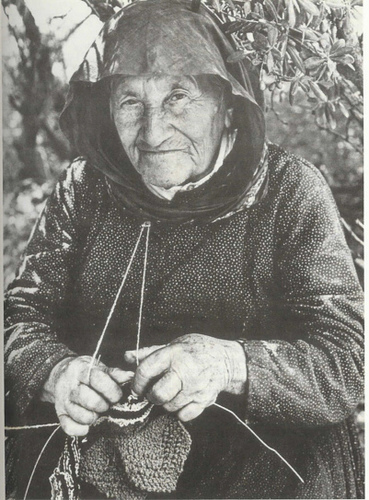 “The most formidable knitter of her generation,” was the accolade attributed to my great aunt Beatrice in her obituary in “Active Knitter”. At the age of 15 she had already knitted a scarf of over two miles in length and her output continued to be prodigious throughout her life. Perhaps her most notable achievement occurred at the regional County Fair of 1932 when she was challenged to knit a bedsock in the time it took a professional hand-shearer to de-fleece three sheep. She won, and the sock she created still hangs in Shire Hall as a testimony to the speed, accuracy and consistent tension of her knitting.
Always a feisty woman, she once kicked an embroiderer in the face for suggesting that decorative motifs in knitted wool lack the sharp-lined clarity of woven picot. In later life she was afflicted by the arthritic curse of knitters knuckle and had to abandon her needles. She took up building Lego pirate ships as an alternative pursuit but her heart wasn’t in it and she declined rapidly to her death in 1989.
Posted by Priddey Family History at 05:20 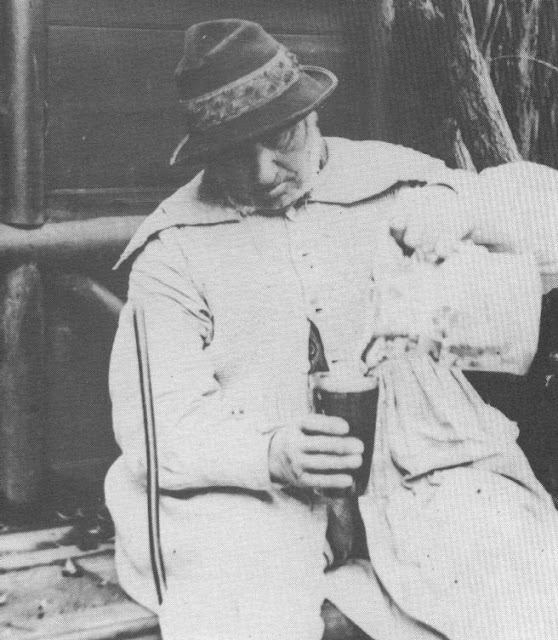 Alf was the artistic member of his family. Unlike his brothers and sisters he eschewed life on the farm to travel beyond the parish boundaries of Lambwick Hall. In 1907 you would have found him drinking with James Joyce in , discussing poetry and philosophy. From there he moved to where he debated Christian existentialism with Gabriel Marcel and travelled out to Giverny during the summer months to stay with Claude Monet and his family. At the outbreak of WWI he returned to and joined the Royal Welch Fusiliers where he met Siegfried Sassoon and Robert Graves. After the war he settled in and worked with Ezra Pound to promote the works of his old friend Joyce. After a major falling out with Pound in 1932 Alf returned to Lambwick Hall. He took up residence in a shed at the back of the Farshott Arms and from that point became an almost permanently drunken denizen of the pub. Although claiming to be an artist there is no evidence that Alf ever created anything than a damp patch at his end of the bar. Alf died of pneumonia in 1939 on the day that Churchill announced that was at war with .
Posted by Priddey Family History at 05:19 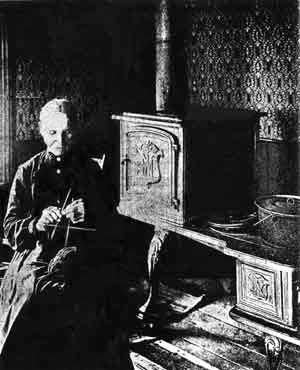 My great-grandmother was a religious woman who was particularly strict about the observance of Sunday. I remember as a child visiting her house on a Sunday and settling down to read my Chick’s Own comic book. She told me, “One should only read the Lord’s book on the Sabbath,” and put my storybook about puppies and kittens in the furnace of the stove. She also admonished my father for having “an idolatrous tie of Catholic persuasion” and my mother for having admitted to planting some beans earlier that morning – “No work should be done on the Lord’s day,” she said, “other than the praise of the Lord Himself.” When I pointed out that she was knitting and this was a form of work, she went almost purple with fury and said that knitting was God’s work, “Why else would He the Creator have provided us with sheep for wool and the sturdy elm from which to fashion needles? Was not the Lamb of God a lamb?” she said.
She died of shock when she saw a television for the first time in 1950.
Posted by Priddey Family History at 05:18 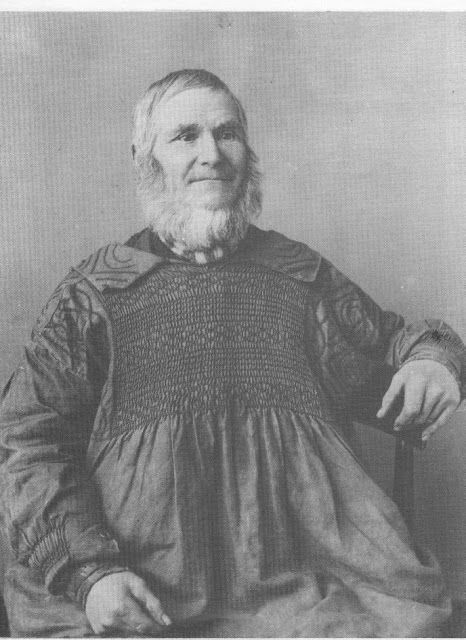 Despite being a national finalist on five separate occasions, my Great Grandfather William Priddey never won the “Shepherd’s Beard Of The Year” competition, although he was highly commended for his patent “Bell Wether Chinstrap” in 1911.
Great Grandfather also tried to grow a pair of ram’s horns on his head. He prepared his own growth stimulant concoction based on horse lineament, liver and sheep droppings which he rubbed each morning into the two parts of his scalp from where he wanted his horns to sprout. It didn’t work; the only result was that he smelt so bad that he was barred from all public buildings in the vicinity and great grandmother Kate had to wear a peg on her nose.
He died in 1928 trying to head-butt his way through some French doors.
Posted by Priddey Family History at 05:16 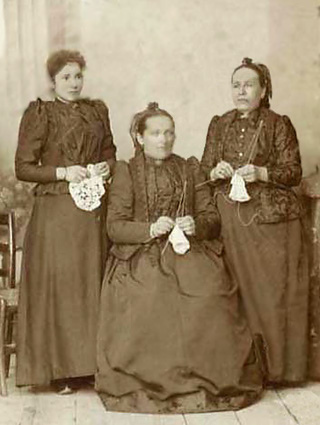 The three Priddey sisters Mary, Millie, and Maud founded the Lambwick Hall ‘Friendly Society of Knitters’ in 1835 to protest against the reduced pay rates for hand-knitters in the face of cheap foreign imports of cotton goods. They swore an oath of allegiance to not knit for less than 4d a skein to try and protect themselves from exploitation and so formed one of ’s earliest trade unions.
In 1836 the sisters were charged by the London Guild of Wool Garbers for having formed an illegal society based on the swearing of an oath. They were found guilty and, despite widespread public outcry, were sentenced to transportation to .
Nevertheless, the Priddey sisters thrived in Australia, finding abundant wool sources from the burgeoning sheep farming industry in that part of the world. They ended up as wealthy knitwear exporters and many of their goods found their way back to . The sisters are commemorated by a statue in their home town of .
Posted by Priddey Family History at 05:14 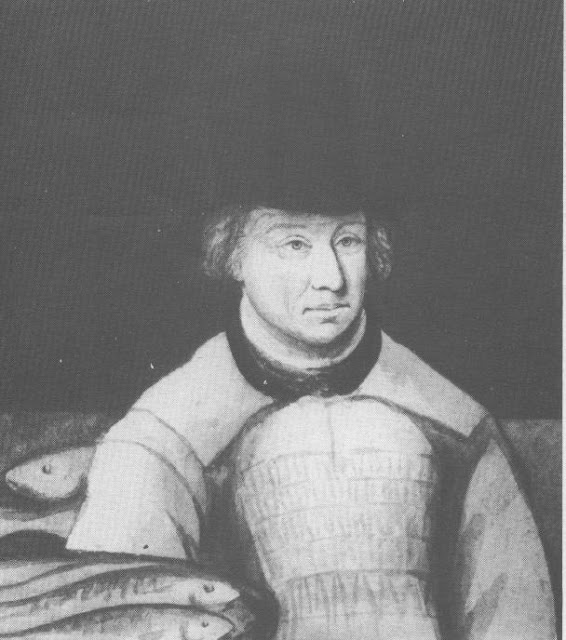 Elias Priddey was a pioneering fishmonger. He is believed to have been the first fish vendor in England to have placed a small piece of parsley next to the fish on display in his shop and as a result sales increased tenfold – nowadays it is very rare to see any fish displayed without an adjacent piece of parsley.
He became a wealthy man and invested his money in wasps. He wanted to train wasps to make jam in much the same way as bees make honey. His diaries tell a sorry tale of failure and painful stinging as the wasps proved unwilling or unable to produce any kind of preserve other than a thin marmite-like substance.
Posted by Priddey Family History at 05:12